Shungite the medicine of 21st century!

Shungite has been used for centuries however only recently in the year 1996 Professor
Robert F. Curl Jr, Sir Harold W. Kroto and Richard E. Smalley recieved
Nobel Prize in Chemistry for their discovery of fullerenes.
No physicist or chemist had expected that carbon would be found in such a symmetrical form other than those already known.
Due to their unique structure, fullerene molecules possess amazing life-boosting qualities.
For example, in interaction with water fullerenes behave as the most powerful and long-acting antioxidant.
A short time after the discovery of fullerenes came a discovery that shungite is the only natural mineral,
known currently, which contains fullerenes in it.

There are 3 types of Shungite:

*elite shungite (type I) noble shungite is the purest and rarest form of crystal rock, containing over 90% of carbon. Represented with very shiny surface but high fragility royal shungite has the highest energetic potential of all types. For only 1% of all Shungite that is found, making it the most expensive.

Shungite refers to a dark, lustrous mineraloid made up of 98 percent carbon, which gets its name from Shunga village in Karelia, Russia. The mineraloid has long been used as a folk medical treatment since at least the early 18th century, and more recently as a pseudoscientific alternative medicine technique associated with crystal healing. Some followers of this pseudomedicine believe that shungite has certain properties that can block or absorb EMF radiation (also associated with 5G conspiracy theories). Shungite became the subject of several memes and a form of copypasta in May 2020, after Twitch streamer Dr DisRespect discussed the mineraloid during a livestream.

Shungite was coined as a term to describe a mineraloid with more than 98 percent carbon back in 1879, but it was used as early as the 18th century in folk medical treatments. In the early 1700s, Peter the Great built the first shungite spa in Karelia, Russia (near a massive deposit) due to the mineraloid’s water purifying properties, and also used it to purify drinking water for his army (due to its anti-bacterial properties). In the 2010s, coinciding with the rise of crystal healing, shungite began frequently appearing as a material used by this pseudoscientific alternative medicine community[1] for its perceived ability to protect against electromagnetic fields, which some believe it can block and absorb. On December 27th, 2013, the YouTube[2] channel Crystal Healing can be seen discussing this topic in a video (seen below), which has since been viewed nearly 18,000 times and liked 370 times.

Within the crystal healing community, shungite has become a common topic of discussion due to its reported trace amounts of naturally occurring fullerenes, which were discussed in an article in the October 2005 issue of Chemistry & Biology.[3] The YouTube[4] account Energy Muse covered this topic in a video on March 9th, 2018 (shown below), receiving over 80,000 views, 1,400 likes and 139 comments.

Coinciding with the rise of 5G technologies, many followers of the pseudoscience crystal healing community also believed that the mineraloid offered certain protections against EMFs and radiation. On February 4th, 2018, the YouTube[5] channel American Intelligence Media can be seen covering the topic in a video (seen below), which was viewed over 77,000 times, liked 2,000 times and commented on 286 times.

On April 27th, 2020, Twitch[6] streamer Dr DisRespect discussed shungite during a livestream of Just Chatting (shown below), where he said, “I bought a whole bunch of shungite! Rocks. Do you know what shungite is? Anybody know what shungite is? No, not Suge Knight. I think he’s locked up in prison. Talking shungite! Anyways, it’s a 2 billion year old.. like rock, stone that protects against frequencies and unwanted frequencies that may be traveling in the air. That’s my story, I bought a whole bunch of stuff, put them around the la casa, little pyramids, stuff like that.”

Following his stream discussing the mineraloid, he later mocked Twitch streamer xQc, stating, “I can sit here and do what xQc does and watch YouTube videos for seven hours and then stream another six hours, Monday through Sunday. I mean, you want me to do that and play some low budget little Steam game? No, I’m not!” On May 20th, 2020, xQc then responded to Dr DisRespect’s statements during a livestream of his own on Twitch[7] (seen below), calling him “Shungite Andy.” During this clip, xQc said, “I get to watch one hour and a half, two hours video per day. If I play nine hours of games. Shungite Andy can’t talk shit on top of his four-hour horse. Jesus man, the audacity on that guy.” The feud was later covered in an article on Dexerto.[8]

Memes mocking Dr DisRespect’s use and claims of shungite then appeared online, particularly on Reddit and Twitter. On May 21st, 2020, Redditor[9] Dwez1337 posted a meme on the topic to the r/forsen sub (shown below), receiving nearly 500 upvotes and 17 comments. 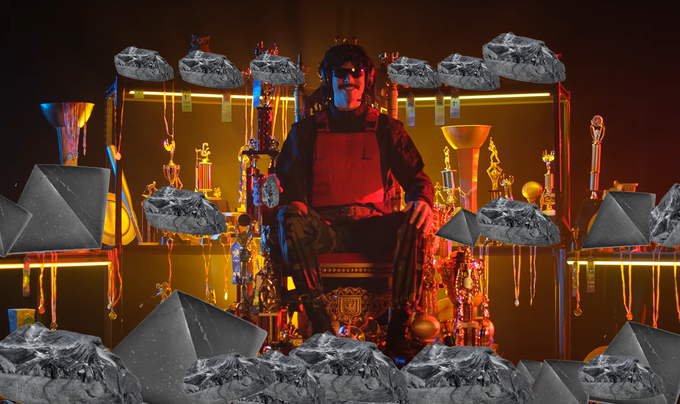 On May 21st, 2020, Twitter[10] user Flar3fir3 posted a meme of Dr DisRespect photoshopped onto a piece of shungite, receiving over 500 likes and six retweets. Twitter[11] user leafy_faze then replied with the copypasta below the image (seen below).